Continued from From toys to hidden rooms! Swedish library where kids enjoy books at their own pace (1).

Go and back between the world of books and the reality

What I found at the corner of the kids area was this!

The bridge and the stage.

The bridge from “Three Billy Goats Gruff & the Troll”!

Although there is someone who is using it wrong, you can see a drawing on the wall,  where billy goat is crossing the bridge.

Press the button on the left side, and then you hear water rustling, a sound of the river.
You hear a goat bleating, and then suddenly, a strong, deep voice comes along.

“Who is it crossing my bridge?! I’ll catch and eat you!!”

It is a voice of troll from the story.

Kids cross the bridge as the troll “talks” to them, and enjoy acting in the story.

There were a woman and her three grandchildren, they were enjoying playing the “Three Billy Goats Gruff and the Troll”. (It seems there is a forth goat, though…)

Right next to the bridge, you can find a box with costumes and stuffed animals (photo below), which enables kids to really “become” a characters in the story and liven up the play.

Three girls at the bridge came to the box, took out a doggy doll, put it under the bridge and then crossed the bridge. They were using the dog to resemble Troll.

Next to the box, you find a mirror. There were kids checking oneself here after putting on the costumes. What a nice regard for the small ones! 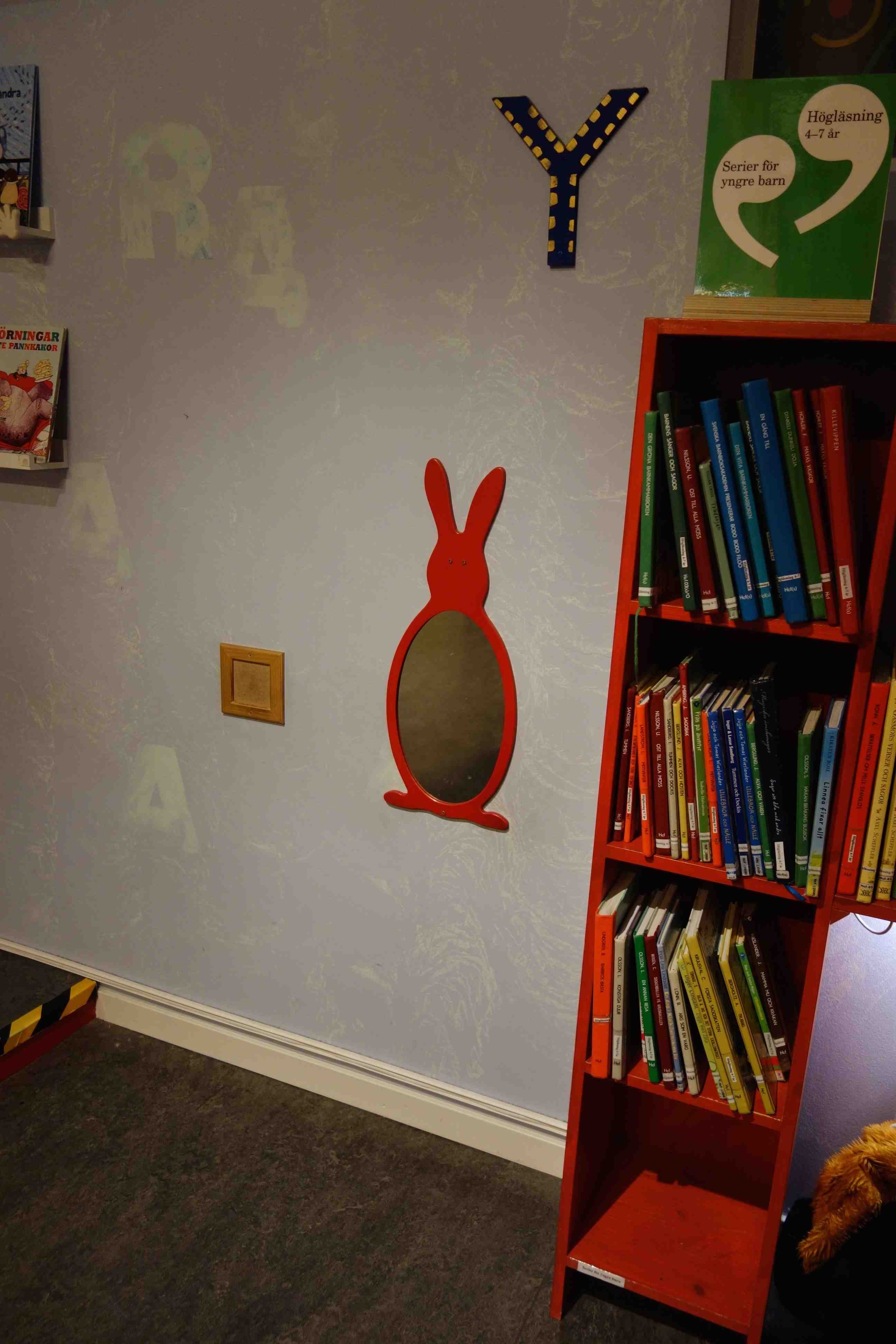 There were costumes with variation: from princess dress to mantle, aliens dog and more. Kids could imagine a variety of stories and play it.

It is not a “place to sit and read books quietly”

Sounds to liven up the stories, a stage where kids can freely act the stories.
There were always some sound in the kids area, someone talking, reading out loud and acting. The room is designed to allow talking, not to let all the kids sit and read quietly.

You could see it on the wall at the entrance of kids area: it says “do not scream or run”, but it does not say “do not talk”.

Read and play: Yes
Scream and run: No
Pick up the books: Yes”

The kids area at the library is not where you sit and read books quietly, but where you can feel the world of books through five senses and also express the story through acting.

It was not the only thing, which made me surprise, however. There was a “hidden room” next to the kids area…!

Continue to From toys to hidden rooms! Swedish library where kids enjoy books at their own pace (3).