Continued from From toys to hidden rooms! Swedish library where kids enjoy books at their own pace (2).

Only kids can enter? Hidden room with a lot of toys

Here is an entrance to the hidden rooms, under the staircases! 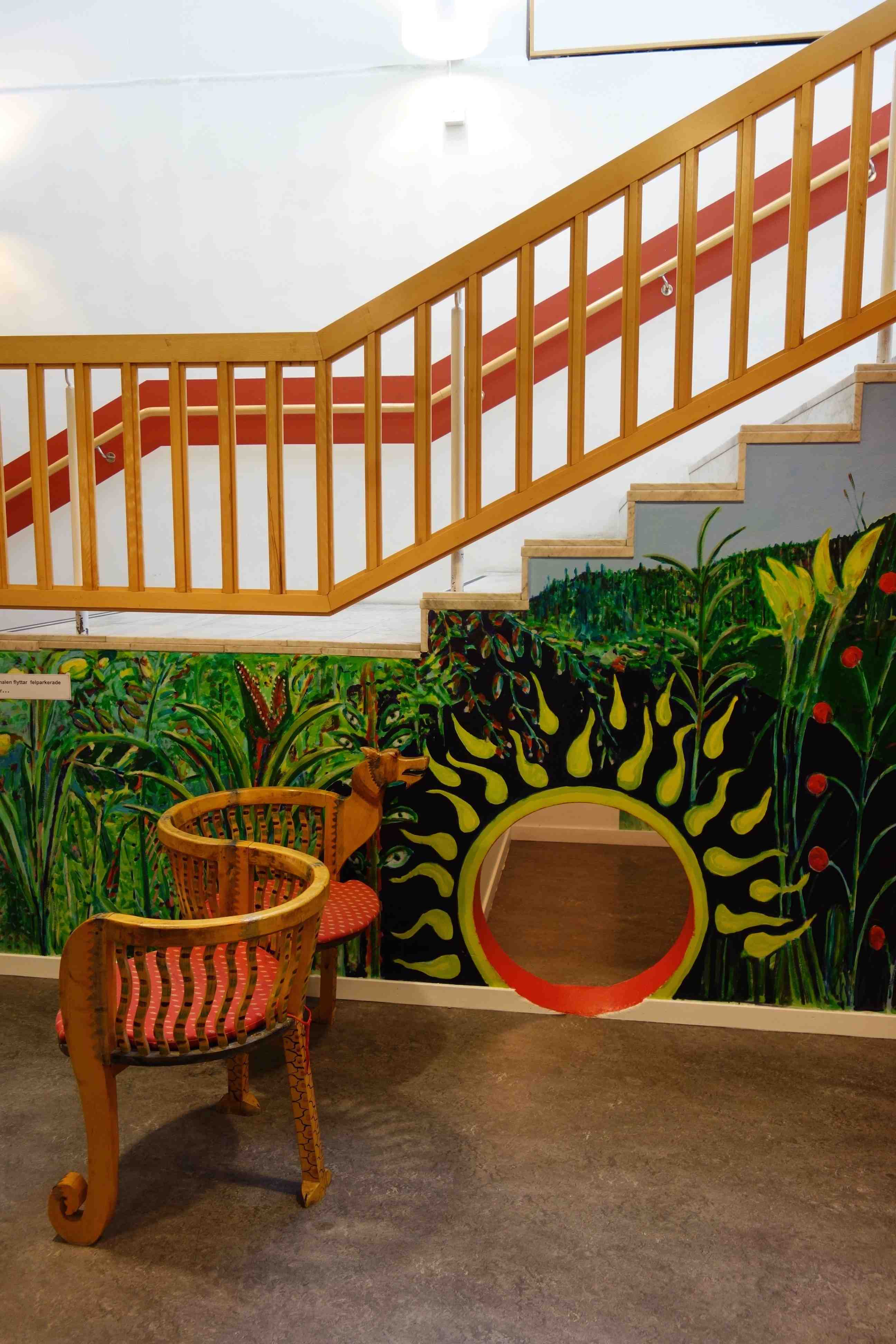 Two-years-old kid could enter if s/he crouches. It seems difficult for adults to enter from here…

Meanwhile, there is a narrow space where you could enter this hidden room from the kids area. If you look from there, it is like this. 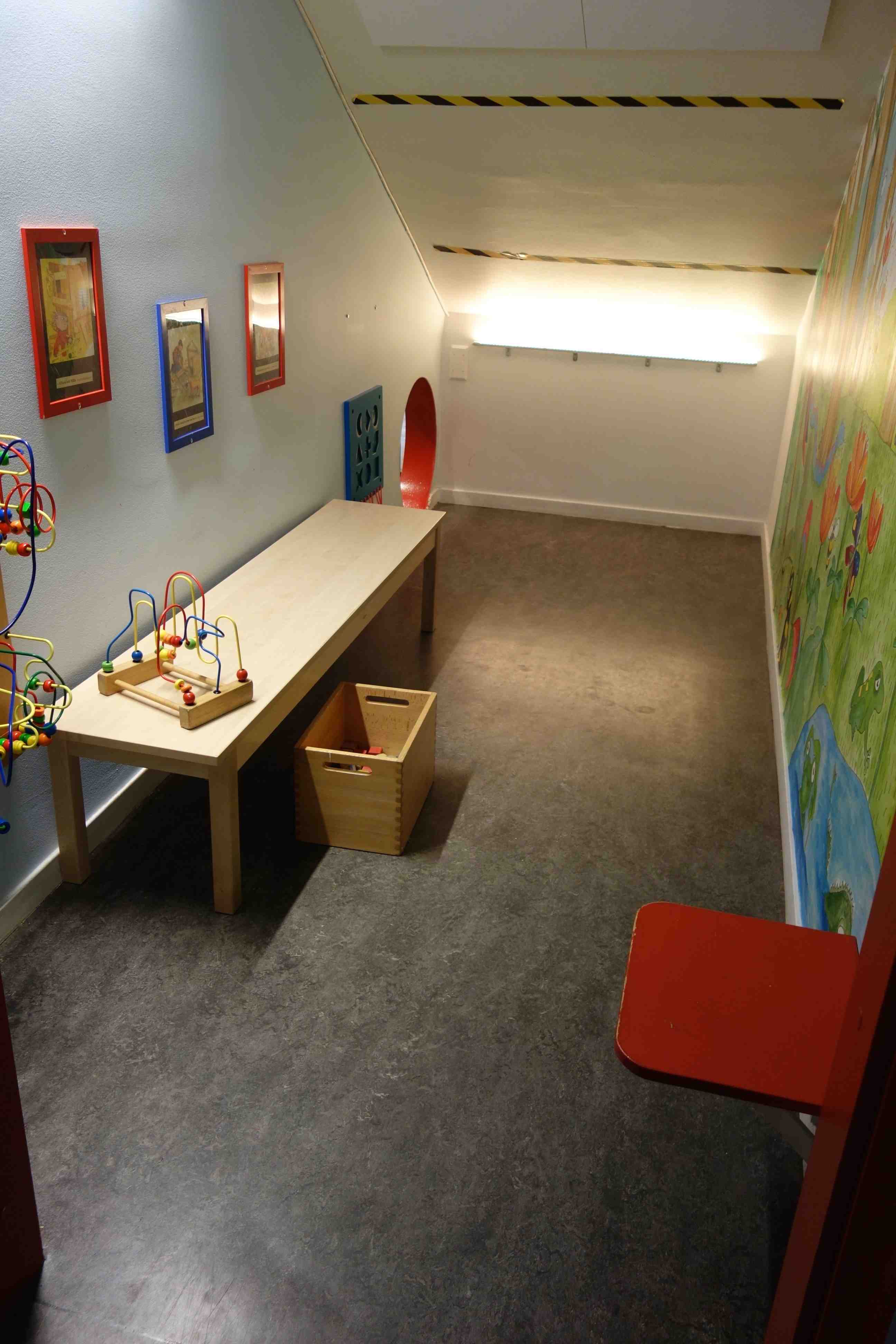 On the right hand side, you see a big drawing (from the story) on the wall. On the left hand side, there are many toys such as building blocks, puzzles and looping etc.

On the backside on the left, there is an entrance for kids which we saw a few seconds ago. The ceiling is slanting as there is staircases above. Adults have to crouch in the room.
Basically, it is designed for kids only.

If you see the hidden room from the kids entrance, it looks like this. (photo below). In the backside on the right, you can see the kids area.

Do you see a dark space with an owl (?) in the back? It is also a space with a cushion where you could lie down and read books. If you get closer, you find it a very relaxing, cosy space with a soft lighting though very narrow. (photo below)

Communications start among kids with different nationalities and ages

The hidden room is only for kids. Once kids enter into this room, parents let them play by themselves, lying on the cushion and relaxing in the kids area.

In the hidden room, kids were doing whatever they want: some playing on one toy, some changing toys once in a while, and some running with the costumes and mantles. It seems as if they came to visit friend’s house. 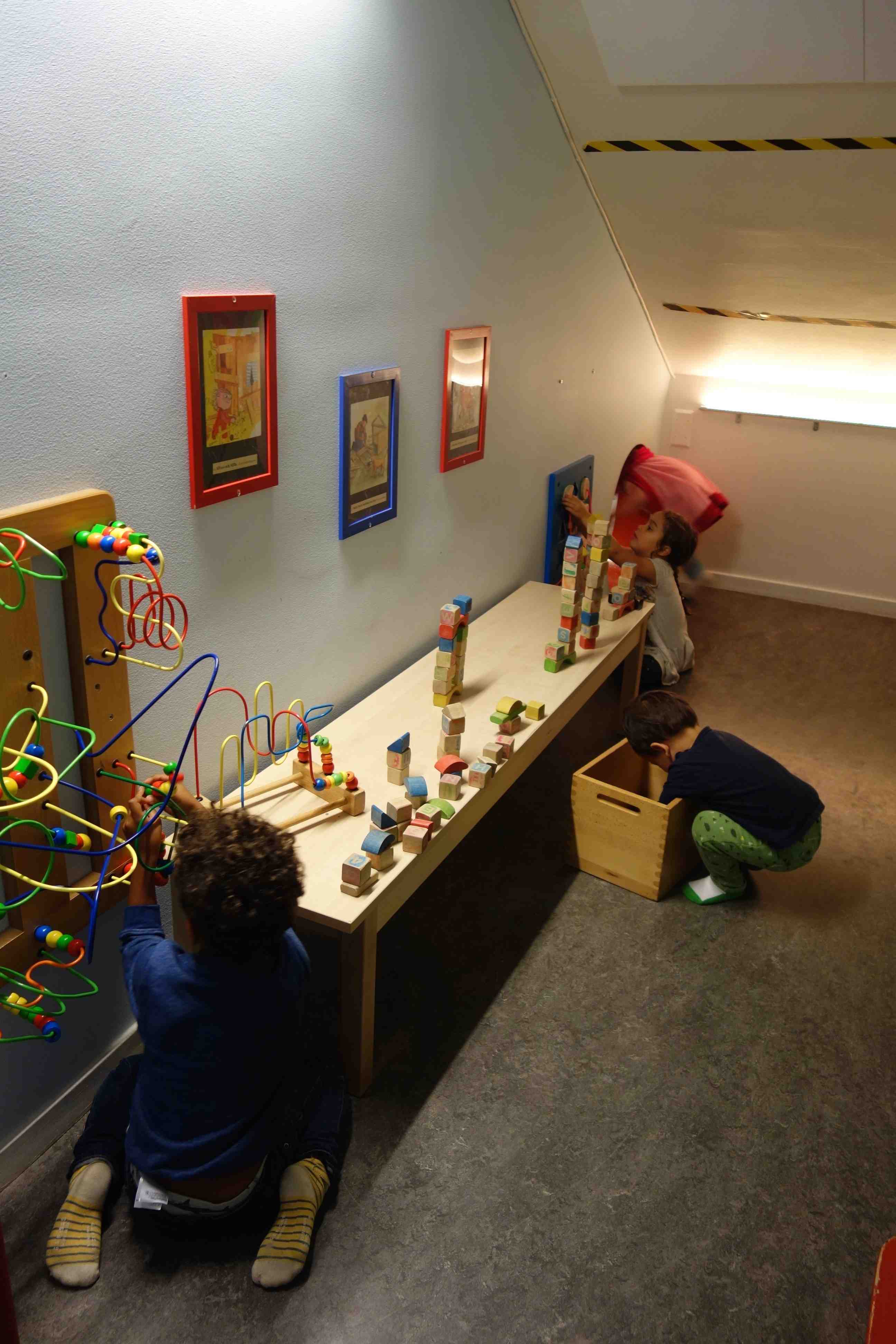 In the room with only kids, the communications seem to naturally start through toys: playing together, the old ones caring the younger ones, checking what the other is doing with curiosity etc.

There were not only Swedish kids, but also some kids from Somalia, China, etc. Different ages and genders. (photo below) 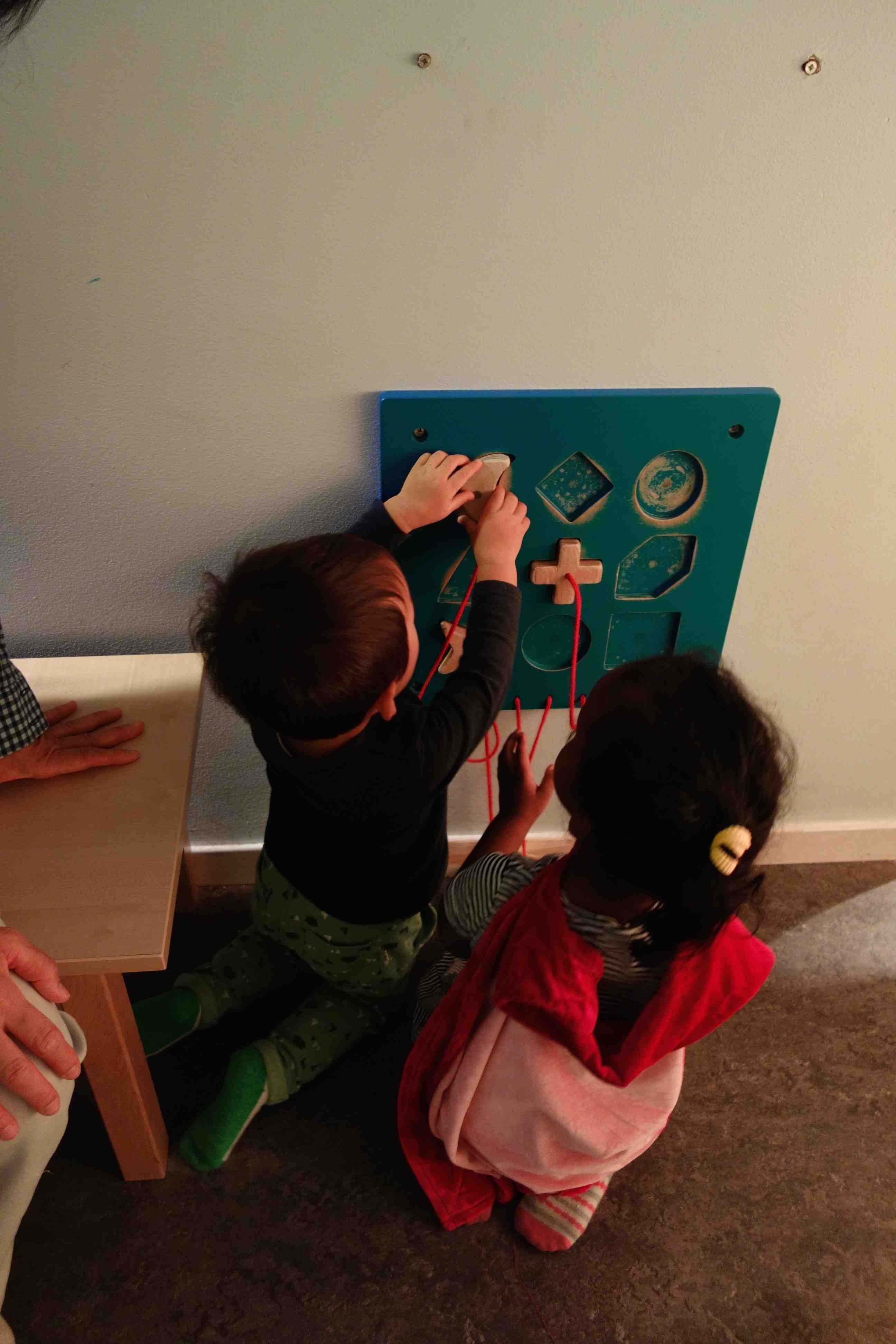 A place where kids enjoy books at their own pace, which make them “want to come again”

Kids seemed to enjoy different spaces and facilities at their own pace, following their curiosity at the moment.

Act the story with the costume on the stage, and then go to hidden room to play with toys. After enjoying enough, go to the kids area and pick up the book. After reading by himself, go to a parent to read together…

Each one of them were going around the rooms very freely on their interests at the moment.

There were much more fascinating facilities, but anyway, it was where kids naturally get familiar with reading books, by just following their interests and playing. 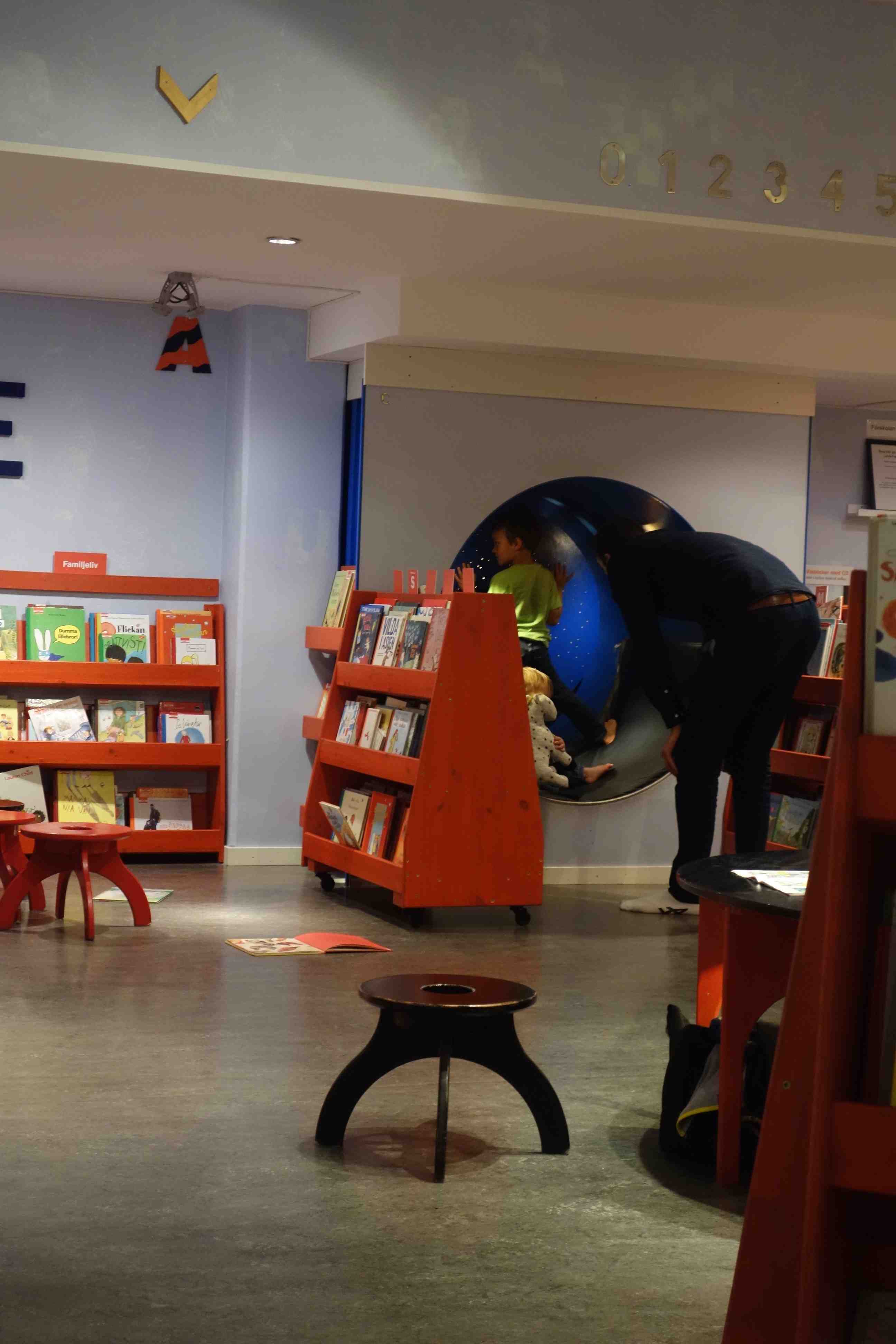 (photo above) A father with two kids. It was daytime on a weekday, and there were many fathers and grandmothers.

Is it only this library or also in other regions?

It found it very unique that such a place (where kids naturally get familiar with reading books) exists within a library where adults come and learn by themselves, not in a place only built for kids.

But then I came to think, it might be only Uppsala city library which has such a wonderful facility.

I wondered how the libraries are in other regions.

With this question in mind, I decided to visit other libraries in four cities in Sweden and Denmark.

As a result, I found all the kids area of these libraries were desinged for kids to act, play and enjoy, not for “sit and read books quietly”.
I will share more findings on “library” later: there were also many findings in the adult area as in each library as well!