Total populations of five Nordic countries is about 25 millions, which is almost as equal as Tokyo. Greater welfare greater charges being Welfare States, and people regards “Work-Life balance” as important issues.

While it seems unfavorable situations for companies growing their businesses, Global companies are appearing from the Nordic countries such as LEGO, H&M, IKEA, Volvo, Eriksson etc. “Nordic Design” is also acquiring many fans in Japan, and Nordic startups  such as Skype, Spotify, Rovio (developer of Angry Birds), King (developer of Candy Crush) is now getting worldwide attentions.

* Work by thinktank Martin Prosperity Institute. It evaluates the advanced economic growth and sustainable development with three T’s: Technology (investment in R&D, labor force and innovation with patent), Talent (education and acquirement of people with enterprising spirit and skills) and Tolerance (economic development and prosperity by people and technology).

As if it is a zoo! Lion barks at a baggage claim of the airport

One scene from Copenhagen airport, in the capital of Denmark.
A big campaign was ran by Copenhagen zoo around the baggage claim.

As you walk seeing big photo of animals…

And then you see a lion in its real size inside the turntable. It barks with its head shaking as if it was alive, kids get scared.

As you walk further down, you find some footprints like this:

You forget that you are at the airport and are urged to put your hands and feet on the footprints to jump. However… 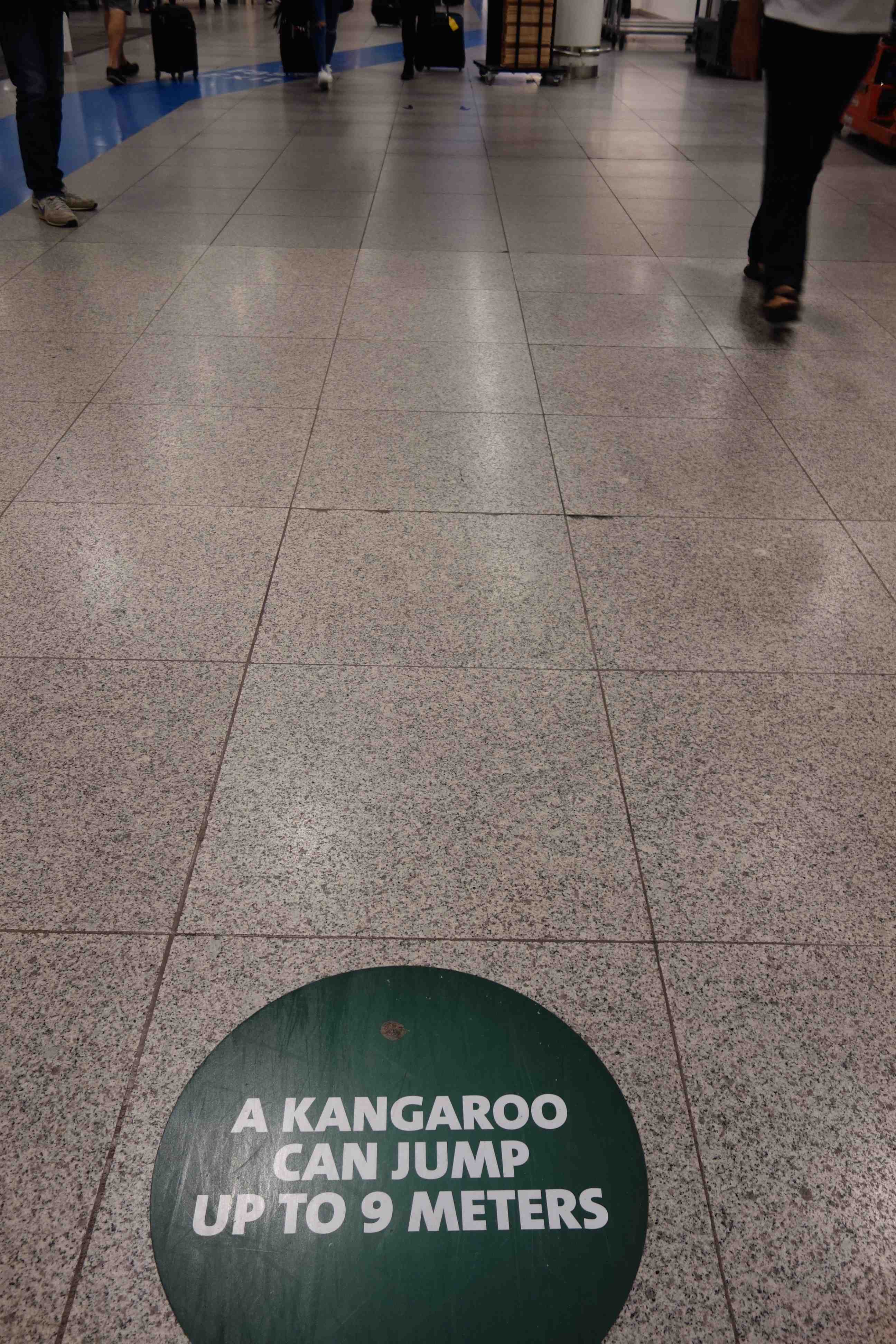 “A KANGAROO CAN JUMP UP TO 9 METERS”

Next footprints is far down there, nine tiles away. Well, you cannot jump that far…

Around the area, there are photo spots with animals drawn on the ground (animals pops out three dimensionally when taking photos) and it seemed it was as if a zoo.

After enjoying the areas and when we were about to leave the spots, a woman in a Copenhagen zoo costume came to us and gave us a discount ticket to the zoo. It was a campaign that give us fun experience as well as a strong impression that “there is a zoo in Copenhagen”.

Next it’s a town of Copenhagen! Take a break on a classic bench

As you walk more, you find a next turntable with classic cast-iron benches. People sit down on the benches, relaxing, to wait for their baggages coming out.

Lawn (photo) on the ground.

Big hashtag on a lawn. 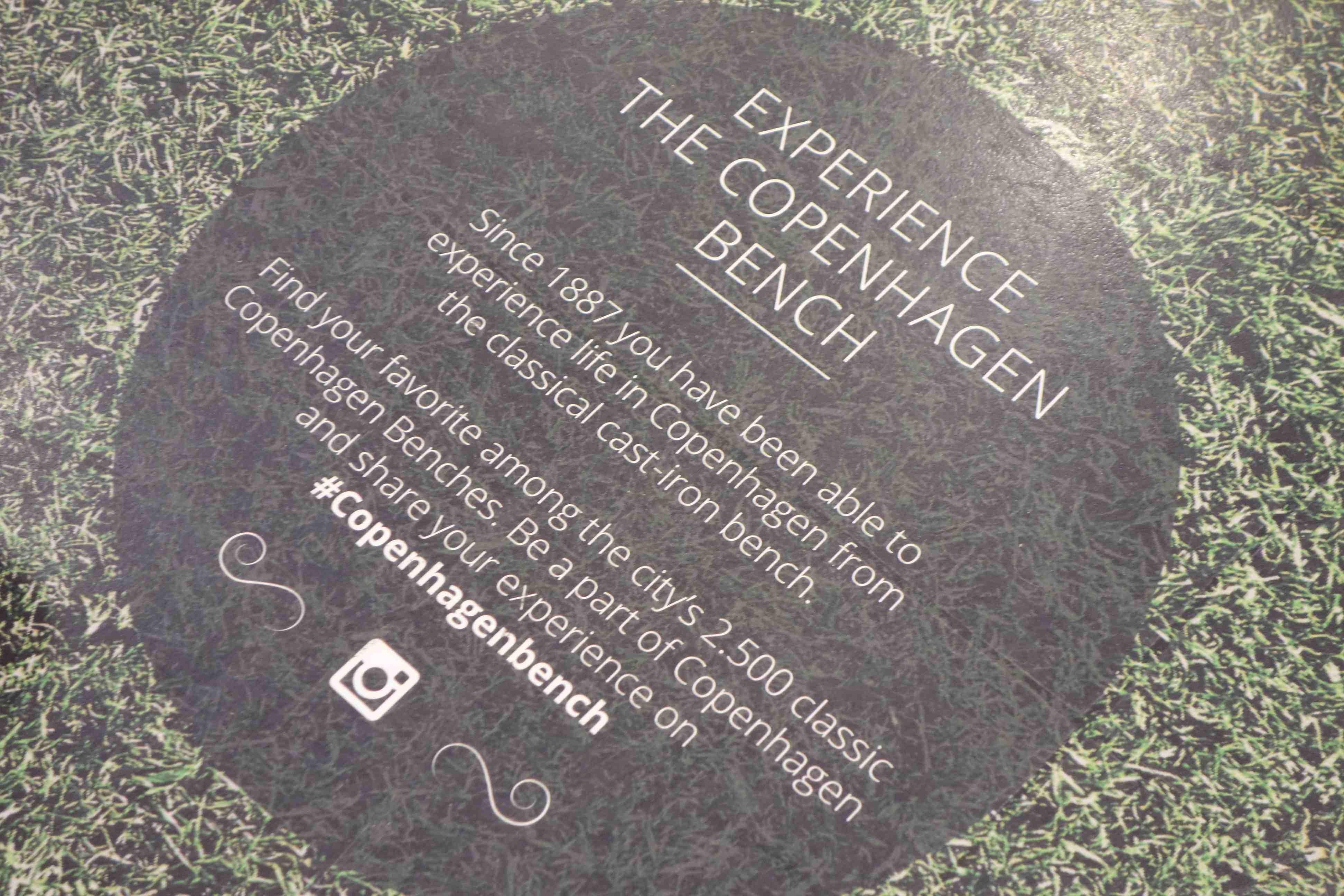 Apparently, it is a campaign “Experience the Copenhagen bench”.

“Since 1887 you have been able to experience life in Copenhagen from the classical cast-iron bench.” It is a campaign to find your favorite among the city’s 2,500 classic benches and share on the instagram.  (Could not find who is initiating the campaign on the internet… Copenhagen city?)

Cute bench for kids. It is from LEGO.

Next to the photos, you find a real bicycle pump hanging on the wall.

“Everyday, locals in Copenhagen bike 1.340.000” kilometers, the equivalent to 31 times around the earth!
Feel free to join…”

Around the baggage claim was such a playful area with creativity, as if you were at a zoo or in the city of Copenhagen. Just being the area, you feel the anticipation and inspirations for the upcoming trip grows in yourself.

We would like to explore further about creativity and “education” with more cases.